Stay Up To Date
Facebook-f Instagram Linkedin-in
Jump To Section
What's the difference between web design and web development in 2021? It’s no longer as simple as website design or code.

In 2023, it’s hard to find a web designer that doesn’t have a basic understanding of HTML and CSS or a web developer that can’t put a decent wireframe together.

If you’re strictly looking at the general outline of each role however, the distinction becomes clearer.

Let’s take a look at the differences between web design and web development and what you may need for your next project.

Web design covers everything that you see on a website, including its visual aesthetics and the overall usability.

This is also known as user interface and user experience (UI / UX) design.

Web design is entirely focused on a sites visual appearance and less concerned with the systems and code used to make it all work.

Web design brings a digital experience to life through the use of colour, imagery, typography and layout.

That being said, many web designers are able to use HTML and CSS as it helps with their designs and can allow them to bring a mock-up to life when necessary.

Web designers often work with platforms like WordPress or Shopify to create websites for their clients.

These content management systems allow them to create websites without writing a single line of code while allowing the client to manage their website easily.

Web development involves every line of code that makes a website work, from the front-end design code (HTML / CSS) to the back-end server code (PHP / Java).

The front-end code is responsible for displaying the website to the user, a designer creates the mock-ups and a front-end developer makes it work on a website.

Back-end code is in charge of managing the database and serving that data to be displayed on the front-end.

It’s a developer’s job to bring those mock-ups and designs to life.

That being said, understanding the designer’s intentions requires some knowledge of UI / UX best practices.

As you can see there is a lot of crossover between web designers, front-end developers and back-end developers and it’s common to find an individual who claims to cover all three areas but often within a team you’ll find people specialising in each specific area.

A project manager works closely with the client and the rest of the team throughout development, a graphic designer works on branding and logo design, the web designer puts together website wireframes and mock-ups, the front-end developer implements those designs on the website while the back-end developer makes everything work behind the scenes.

I hope you found this post insightful, if you have any questions about our web design Brisbane team or how we can help with your website please don’t hesitate to get in touch.

To your success,
Jackson 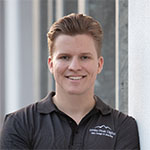 About The Author
Linkedin
Jackson Gartner
Jackson Gartner is a web designer and the founder of White Peak Digital. He has a background in website design, branding and customer experience. In his free time, he enjoys motorsport and spending time with his friends and family. How to Transition from Universal Analytics to Google Analytics 4

Google Analytics (GA) has recently released a new version, GA4, which is set to replace the current Universal Analytics. In this article, we’ll take you through the step-by-step process of setting up GA4 and migrating your data, so you can continue to track and analyze your website’s performance effectively. How to Generate Google Reviews for Your Business in 2023

Generating Google reviews can improve your online reputation and attract more customers. Follow our tips to ask for reviews, provide clear instructions, thank your clients, respond to all reviews, and encourage your clients to share their reviews.